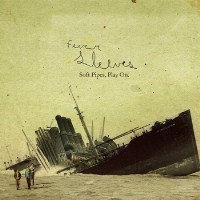 The first time you listen to Fever Sleeves, you might find it hard to put a finger on their brand of music. On one hand, you have this beautiful calculated math rock sound while on the other, it’s a noise fest filled with random guitars, hazy vocals and unconventional drumming.

Soft Pipes, Play On is the band’s debut record, it might be two years old but with just one listen you can tell that there’s something special about it. The band hails from San Diego, CA and have been around since 2004. Their first single, Futuristic Killings, paved the way for the band’s much anticipated full length debut back in 2009.

The band credits influences from Radiohead, post hardcore Washington band, Q and not U, No Knife and Refused to name a few. Their sound is littered with offbeat drumming, weird rhythms and interesting vocal melodies which add to their distinctive sound.

It takes a bit of time to actually love the album. When I first listened to it, I wasn’t sure whether I liked it but after having it play in loops and taking in much of the unusual sounds emanating from the tracks; it’s actually an enjoyable record to have. Tracks like Vampyroteuthis (which is a type of squid for those who are curious) start off the compilation with the band’s characteristic ambiguity. Instruments are coming in from every corner with drums and rhythms vying for your attention. It’s topped with some melodic chanting/singing right at the middle part.

Their original single Futuristic Killings is also part of the record. The song is probably the closest you’ll get to “proper” song arrangement compared to the rest of the tracks. It’s a typical indie dance rock record with sweet harmonies thrown in for good measure. The whole thing is capped off with Grrraldo. The cut embodies much of what the album is about with incomprehensible lyrics, time signature changes and great drumming.

Overall, those who easily get frustrated at having 10,000 things playing through their ears at once, might want to stay away from this. Sonically though, the album is a great melting pot of sound. It’s perfect for a loud blaring party or if you simply want something complicated to listen to.