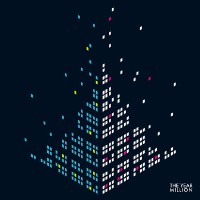 When it comes to alternative rock, the genre is often littered with bands that all sound the same. However, occasionally there are bands who up-the-anti and deviate from the usual mix to bring their own brand of sound; The Year Million seems poised to do this.

Together, they play their own flavor of indie alternative rock.  Creating subtle and enjoyable melodies that garner comparison to bands like Queens of the Stone Age.

This self-titled release is a first for the band. Released about two years ago last June 2010, the album comes with 11 tracks equipped with catchy rhythms and pure rock energy.

Generally labeled as an altrock band, they often extend their sound into indie/hipster territory, carefully infusing various elements and genres to ultimately create a sound unique to their own. You can hear this sonic fusion in cuts like Weight,  which is a catchy single that opens up the album. There’s also Something Like A War and The Seed; the latter builds up the noise with jangly guitars and great vocals.

Even though this is a first for the boys, it’s certainly showing plenty of promise. The album has enough variety to make it interesting and to set it apart from the usual wave of rock bands out there. The best part is that the entire thing can be downloaded for free. Take a listen, grab the download, and spread the word.