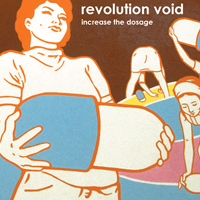 Proving that music never truly died in the region, after its heyday in the early 1990s, Seattle native Jonah Dempcy’s project Revolution Void reached a funkified zenith after 8 years in existence with its 2004 release Increase The Dosage.

The energetic nu-jazz and trip-hop blending in the album actually harkens back to jazz fusion groups of the 70s and 80s, like Weather Report or Chick Corea’s Return to Forever.

Increase The Dosage glides almost seamlessly for 67 minutes over 11 tracks, ranging from the ambient and textural, to effervescent and virtuosic jazz improvisations. Tracks like the opener “Invisible Walls” are subdued in character, and feature very mellow and atmospheric sounds.

The sonic experiments heard through seem to be Dempcy tipping his hat to Bitches Brew and Heavy Weather, but he still keeps the formal simplicity of a group of friends simply “jamming” for enjoyment; as an aside, this album is a solid introduction for someone who may not be familiar with the Miles Davis or Herbie Hancock work of the 1960s.

It’s no surprise we might hear this in the brilliant saxophone playing of Seamus Blake (Mingus Big Band), or virtuosic Jaco-like bass shredding from Matthew Garrison (Herbie Hancock) in the first half of the album.

This is an exciting and enjoyable album I would recommend to anyone who is interested in jazz and other instrumental-based genres.

This work is licensed under a Creative Commons Attribution-Noncommercial 2.5 Generic License.