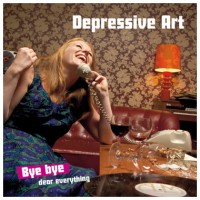 Depressive Art makes music that’s anything but depressive. Their name can be misleading since Depressive Art seems to have a knack for playing upbeat retro indie rock n’roll. This 6 piece band from Gothenburg can crank up the volume and liven up the atmosphere of any party you intent to throw.

Bye Bye Dear Everything is the group’s first album and comes with 10 powerful, danceable, rockin’ tracks.

Bye Bye Dear Everything was actually released at the end of 2007 and gained a lot of praises from the presses. It helped the band propel into the Swedish indie scene, allowing them to play at almost 60 gigs all around the country. Apart from the lively tracks, Depressive Art is also deemed an official must-see when playing live. Their frenetic energy and onstage antics is definitely a nice break from your casual, boring Saturday evening.

The retro indie album is filled with beautiful swelling organs and crooning vocals, reminiscent of 60s rock and roll. It’s hard not to think of The Doors when listening to this band. However, not all songs conjure up a psychedelic flashback. One of the best tracks to listen to is “How to Breathe.” With its falsetto backing vocals and the pounding drums, it’s the perfect accompaniment if you want to get your dance on. “Solar System” is another track worthy of cranking up.

Despite making beautiful music together, as of this writing, the band has officially announced that they will be parting ways. Fans will not be disappointed though as the band left an EP (download link is on the lower right side) before ultimately saying goodbye.

The album is available under a creative commons license.