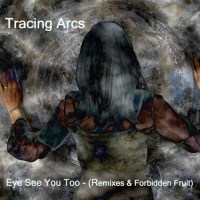 Tracing Arcs is the brainchild of British duo Fran Kapelle (vocal/lyrics) and Paul H. Addie (synths/programming). Their previous record, Fin, met with plenty of positive responses and was also featured right here on our blog.

Eye See You Too (Remixes & Forbidden Fruit) is a followup to their 2010 release, Eye See You Too, from German netlabel, iD.OLOGY. This second album features “remixes of songs from some of the finest artists in the netlabel scene, as well as Tracing Arcs themselves.”

Their music is a mix of electronica, trip-hop, jazz and a deep drum and bass sound that exudes plenty of cool and moody beats.

Tracing Arcs actually started creating music together back in the 90s. In fact, both members are established musicians on their own, having worked with various alternative bands. They’ve also written for theater and have worked with other artists like  Mary Coughlan, Plaid and Ian Shaw.

Eye See You Too (Remixes & Forbidden Fruit) is exactly what you hoped to expect from the formidable duo with the help of various artists from different netlabels. Like their previous record, this remix comes equipped with mesmerizing tracks guaranteed to hook you from the getgo. The songs vary from slow-tempo electronica tracks like opener, Pebbles & Weed and Wildworld; to jazz-influenced tracks like Rosegarden and even to hardcore deep bass/big beat cuts like Recovery, Icefloes and Deepbreath.

This ambient compilation is certainly worth checking out. It’s not just the moody and soothing rhythms that make it work but the enchanting vocals also help to add to the atmosphere of each cut.

This compilation is the first one released by the band under 23 Second Netlabel. You can find their previous work under iD.OLOGY, MixedMode or even Dusted Wax Kingdom.