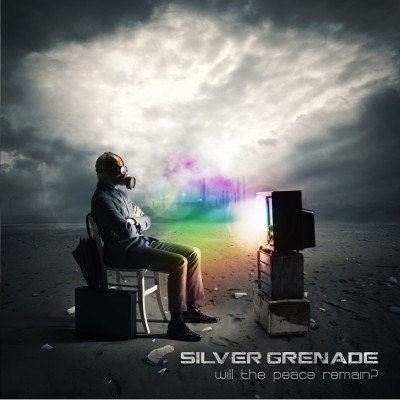 Silver Grenade: Will The Peace Remain?

The album is a straightforward modern rock record with alternative tracks thrown in for good measure. Coming in with 10 bangin’ tracks, expect something loud and deafening. You get a reprieve on the volume in certain songs but those are few in between.

This is the first album for the band and so far they’re showcasing a pretty good set of sounds worthy of a listen.

Kicking the record is a dark, guitar-driven Intro. It runs a little over a minute showcasing an atmospheric rock track. It’s almost an extension of the first cut, The Escapist. Speaking of, the first track starts blasting heavy guitars, steady drums and gang vocals right from the onset. Although it’s not exactly perfect, it’s a coherent piece that maintains the energy built up by the band from the start.

End of Days is another loud track that combines a bit of that metal sound to it. Maybe it’s the melody and the way the guitars are played but I can imagine hearing and seeing the video on 80s/90s MTV.

Apart from the louder tracks, the guys do know how to step on the brakes if there’s a need. One of the best slower tracks include the acoustic number, Cold & Frozen, which strips down Scotty Doo’s vocals and exposes it for its raw sound.

The album has its shining moments and for a rock album, there’s plenty of beautiful harmonies embedded within the songs. Guitars and instruments are well done and the recording quality is pretty good as well. Overall, it’s a polished record that should please any modern/alternative rocker. Take a listen and grab it if you like what you hear.