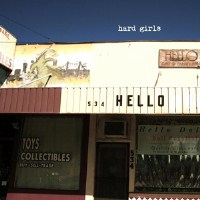 Hard Girls’ Hello is a wonderful indie pop rock compilation that’ll put you in a good mood. Its mix of alternative indie rock with super catchy pop beats makes this a winner. Fronted by former Shinobu vocalist, Mike Huguenor; the album brings a sound that’s reminiscent of the California Bay band along with a touch of something fresh and new.

Packed with 7 upbeat, rockish tracks; the record features one catchy song after another. With members coming from two prominent indie rock bands in the area, Shinobu and Pteradon, the record doesn’t disappoint in hauling plenty of rock spunk . Download the album for free on Quote Unquote Records by hitting the download album link on top left.

Joining Mike Huguenor in creating plenty of good mayhem is Morgan Herrell and Max Feshbach. Hello is a great compilation that opens with the hipster infused single, Shame Your Name. Perhaps one of the catchiest songs in the demo, the song showcases twangy guitars with upbeat drums and slightly growly vocals. Huguenor’s voice adds plenty of punk attitude to this otherwise hipster pop track.

Quinceanara, on the other hand, rears a good portion of alternative rock influence. From the vocals to the rolling drums and the slightly heavy guitar riffs; the song reminds me of Rise Against minus the angst. If I had to pick a favorite though, it would have to be the second track from the compilation, Evening Constitutional. The track sits conveniently between alternative rock, pop and indie; it’s hard not to adore.

Although there were times when fusion of sweet, sunny surfer indie rock and the more alternative, punk style of the band didn’t gel as good as was hoped; the compilation is still a worthy download.  While you’re at it, you might want to share a little something for the band as well.