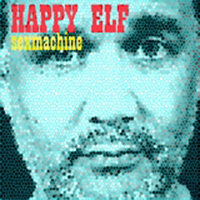 Happy Elf is the performing name of Dutch multi-instrumentalist Jeroen Elfferich. As Happy Elf, Elfferich has released more than ten albums since 1999. He considers his music “electropopmusic,” but the truth is that it is a good mix of various styles thrown together with a nice electronic beat. His latest release is “Sexmachine,” a five-track mini-album that’s all about dreams, sex, love, and relationships. Don’t expect a thoughtful and introspective album, though; as the release information says, “[D]on’t take it too seriously: it’s Happy Elf!”

Based in Delft, the Netherlands, Elfferich has been making music for the last 25 years. He has an eclectic musical background, performing as a percussionist in orchestras, guitarist and lead singer in a rock band, and drummer for various bands with styles as varied as jazz, fusion, and cajun. Since 1999, Elfferich has been making music as Happy Elf. While he primarily works with two analogue synthesizers, he also plays the electric guitar, bass guitar, and drumcomputers. Happy Elf proudly states that he doesn’t use a computer to create the music, but plays all the instruments himself.

“Sexmachine” is a fun and funny album. Each of the five songs has a good beat, driven by Elfferich’s drums. It’s not your typical electronic music where computer synthesizers make up more than half of all the sounds you hear. Because Happy Elf plays all the instruments himself, the result is a more organic and beat-driven sound. You also get to hear bits and pieces of the various influences Elferrich has had, with some songs giving a jazz or an R&B vibe. In fact, on this album, famous blues guitarist/singer Willem van Dullemen from Rotterdam joins Happy Elf on two tracks, adding a bit of blues to the mix.

I also mentioned that this is a funny album. All you need to do is listen to the lyrics of the title track, “Sexmachine”: “I am such a handsome guy / When you see me, you’ll know why / I am not nice, but mean / And I am not your sex machine!” Elfferich isn’t a great singer, either, so listening to his half-spoken, half-sung voice adds to the fun. (Think “I’m Too Sexy” by Right Said Fred, and you have an idea what the music is like.) Even the video is a bit ridiculous.

“Sexmachine” is a fun, funny, and highly-recommended mini-album from Happy Elf. I can imagine it being played at clubs, while guys embarass themselves trying to dance to it.