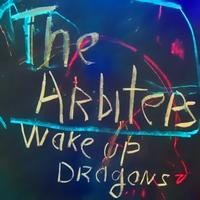 The Arbiters: Wake Up Dragons

The Arbiters create cool indie alternative rock music with a touch of electronica. The recording is slightly raw but filled very intense energy that you could almost feel as if it’s bouncing around the walls. The group sings songs in both English and Russian and they borrow elements from other genres other than indie rock.

Wake Up Dragons is the first full length debut for the group. They did release a single titled ‘Solo” and made it available for sale on both iTunes and Amazon.

Wake Up Dragons opens up with a weird intro running for about a minute or so. It sounds like a mesh of jungle or animal. It then progresses into Leonard’s Dream, which does sound a lot like a dream sequence from a trippy movie. The track combines twangy guitars and synthed-up vocals; making it quite endearing in a weird kind of way.

Solo, is a nice single that contains that indie electronic sound while The Cake, is reminiscent of a Radiohead acoustic track. With the sleepy vocals and quiet guitar strumming, it’s hard not to compare. Your Own Hole is also in the same vein as the latter. It’s a moody acoustic piece that’s perfect to listen to if you’re feeling a little melancholic and looking for something to add to the ambiance.

In contrast to this, Joe’s Vacancy has the band experimenting with a more electronic infused rock track. This one seems like a Nine Inch Nails inspired number. It’s a bit more upbeat and experimental but still has a nice and catchy melody.

The Arbiters might not have come out with a near perfect record, but nevertheless, their record is definitely worth checking out.