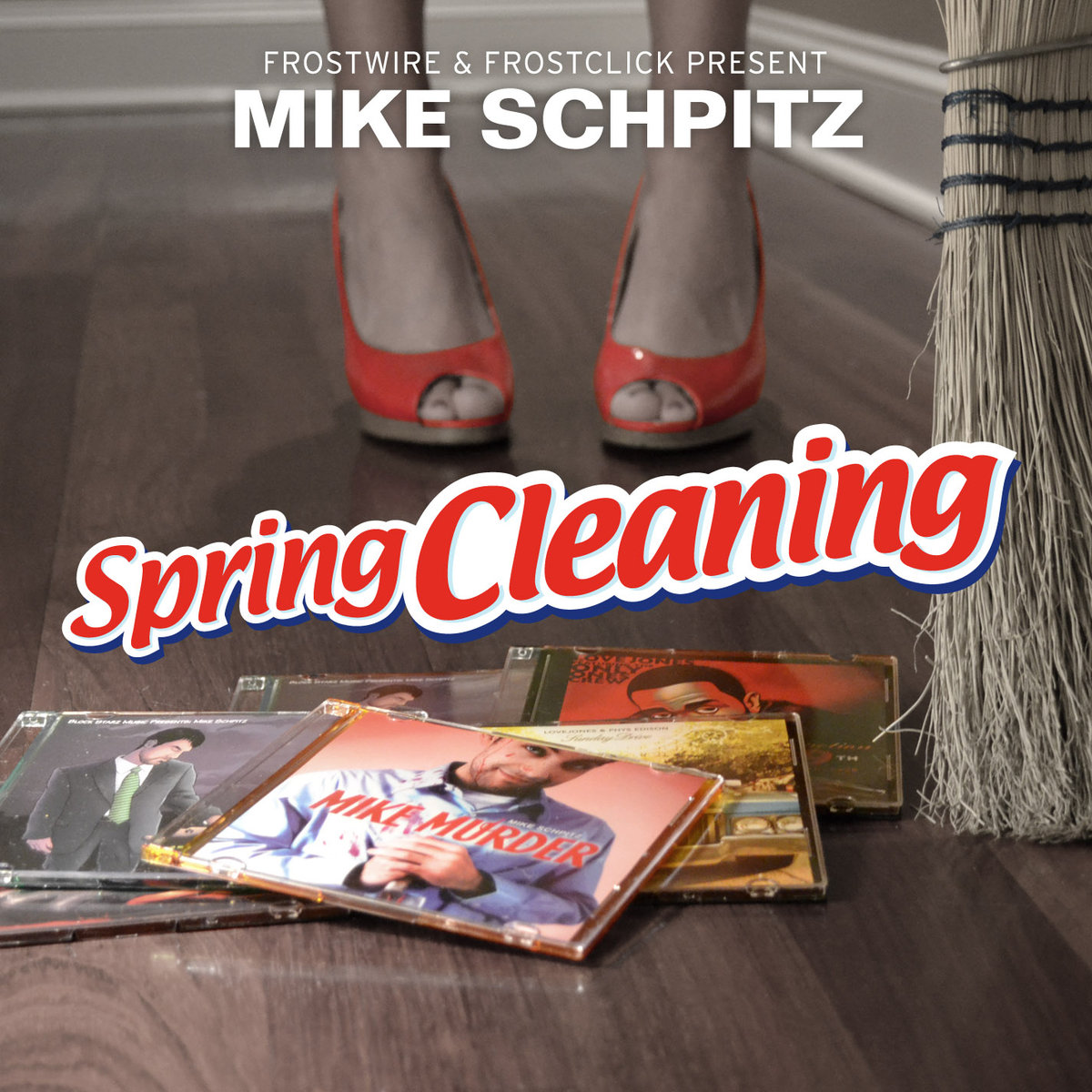 Spring Cleaning is Mike Schpitz latest project, a 19 song compilation of his favorite best songs and one on which Mike and the FrostClick Team have been working together for the past month to bring to you today.

We hope you enjoy it and share it with all your friends, this is truly good hip-hop and we feel very proud to be the ones to to have the opportunity to share with you this exclusive release from Mike Schpitz (aka LoveJones).

In this opportunity we are lucky enough to have a letter from Mike himself to let you know more in detail the background and behind the scenes of Spring Cleaning.

A Letter from Mike Schpitz to all Listeners

I know when albums or mixtapes are released, people often like to hear the backstory or see behind the scenes footage or hear about the “making of” so, I wanted to let people hear a little bit more about Spring Cleaning straight from the horse’s mouth. I have been talking with Frostwire/Frostclick since the release of Sunday Drive in 2009, about doing another project. They approached me about doing a project that would sort of catch people up to speed. Basically a “what has Mike Schpitz aka LoveJones been up too since Sunday Drive.” I had the idea of calling the project, Spring Cleaning so people could see where I’ve been, what I’ve done, hear the progression and change and get ready for the new music that I’ve got coming out. So, I took some of my favorite songs from each of my previous projects and a few songs from two of my new projects and created a “history of” Mike Schpitz.

Sunday Drive was released on Frostwire/Frostclick back in 2009. Since, I have released four additional projects that include Love Potion Number 9th: The Hangover, Mike Murder, Stanley Ipkiss: Year of the Nice Guy and The Prize Package Volume 1. I am also working on three other albums that are pretty much done, that include Sunday Skool with Pete Sayke, Have You Seen My Stapler? with SLOT-A and Paid Time Off with Phys Edison. Spring Cleaning features songs from each of these projects except Paid Time Off(It’s Top Secret). For those who may be new to Mike Schpitz, Spring Cleaning will be a great introduction to what I’m all about. It gives a wide range of sounds and content but still encompasses me as an artist. You can definitely hear the change and progression from Love Potion to Mike Murder to Have You Seen My Stapler? Hopefully people will get a brief taste of what each project sounds like then can journey back to those projects and listen to them in their entirety.

Spring Cleaning features a number of artists and producers that I have worked with throughout the last several years. Some songs are mixtape records where I “borrowed” the beat, other songs are originals where I got the chance to sit down with various producers and artists and craft something brand new. First off, 9th Wonder’s name is seen on Spring Cleaning a few times. Those records are from my project, Love Potion Number 9th: The Hangover, which features all beats taken from 9th Wonder. I’m not sure if 9th has heard the project or aware that it even exists but as one of my favorite producers, Love Potion is my tribute to 9th.

Next up is Mike Murder, which is another mixtape that features beats borrowed from various producers. Mike Murder is basically just my chance to show my lyrical abilities. No hooks, no concepts, just bars. I just wanted to show people another side of Mike Schpitz aside from the Sunday Drive and Love Potion records. On Mike Murder I use production from DJ Premier, Rza, Timbaland, The Neptunes and Dr. Dre. It gives people a chance to hear a lot of lyrics, patterns, punchlines, etc.

I followed up Mike Murder with an EP called Stanley Ipkiss: Year of the Nice Guy. Stanley Ipkiss was released exclusively on iTunes and Amazon for purchase. On this project, I linked up with Block Starz Music for the release. This was the first time that I placed a project in someone else’s hands and let them work it. I have three different producers on Stanley Ipkiss, Rob Bates, who did five records, QB and Nascent, who did three and I’m Trumaine, who did one. These three producers are some of the freshest in Chicago and have all been making a name for themselves. Rob Bates was a finalist in Red

Bull’s Big Tune beat battle which aired on BET a few years back. Rob has a lot of respect from industry producers and has worked with a lot of Chicago’s best artists. QB and Nascent, who are a production team, have worked with a lot of industry heavyweights, the biggest being 50 Cent. They produced two records for 50 cent including Strong Enough, which was featured on his album, Before I Self Destruct. They have also worked with Lloyd Banks, Joe Budden and LEP Bogus Boys. These two guys are really making a name for themselves and graciously lent their sound to Stanley Ipkiss. The last producer, I’m Trumaine is a young, hungry guy from Chicago who has been doing beat battles and producing for a lot of different artists in Chicago as well.

My most recent project, The Prize Package Volume 1 is a compilation of songs that were not featured on any of my other projects. These are records where I was featured on other artist’s albums and mixtapes, songs I did for various mixtapes and some other unreleased stuff. Regardless of what project I am focusing on at the time, I am constantly writing and record other stuff that may not make it on my projects. I don’t have many features on my other projects so, The Prize Package just shows all the “other” work that I have done over the years. It features artists like Pete Sayke, Adullessence, Papi Jamon, Ill Legit, Dre Dai and House On Mars. It also features production from THX, SLOT-A, Maja 7th, Ill Brown, Parker, LONEgevity and others. The Prize Package is a dedication to my hometown and the legendary burger joint, Harold’s Prize Package.

The other two projects that I took songs from for Spring Cleaning are Sunday Skool and Have You Seen My Stapler? Sunday Skool will be my next release and is an album that I made with fellow emcee, Pete Sayke. Pete Sayke and I got together back in October of 2010 to make some music. We had some producers send us some beats and all of a sudden we had made four or five records. We decided we should keep the creative process going and make an album. We formed a group called Grumpy Old Men and created Sunday Skool. Sunday Skool features production from some of Chicago’s best producers. Guys like SLOT-A, Maja 7th, Ill Brown, Wes P, Rob Bates, LONEgevity and more all gave us beats and the album turned out crazy. We are in the process of mixing that record down and planning on releasing it around when school starts in the fall.

Have You Seen My Stapler? is an album that I have been working on for over two years with producer SLOT-A. We have worked closely together for a long time creating this project. It has changed names, added and subtracted other producers but ultimately we decided that we wanted it to just be us two. We have recorded over 25 records for this album and should be done soon.

For Spring Cleaning, I tried to choose my favorite songs as well as the songs that best represented each of those projects so, listeners could really get a taste of what each one sounds like. Each project shows a different side of me and my sound but hopefully makes sense when heard all together. The artwork for this project was done by my guy, Heath O’Campo, who has been responsible for most of my other stuff including Sunday Drive, Mike Murder and The Prize Package Volume 1. I hope everyone enjoys the music and finds themselves wanting to hear all the projects that I have done. Stay tuned for a lot more music.