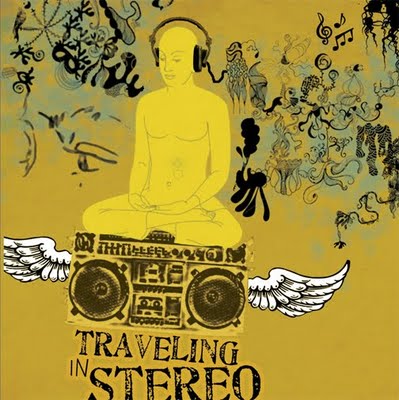 In the normal public sphere they are just average New Jersey citizens, but in the studio and on stage, Andrew Bulloch and Dave Nuñez are known as the hip-hop duo Tab and Anitek.

With the mid-December release of Traveling in Stereo, the group’s fourth collaboration, Tab and Anitek aim to make a slight departure from their past work. In addition to use of acoustic instruments and organic sounds, the album is a interesting mix of genres as well.

The group had an album description released concurrently:

“Chasing Rabbits” was the bad trip, it was dark and heavy. This album is a complete 180 from that. It is upbeat, witty and sarcastic. Mixing elements of all different genres of music “Traveling in Stereo” lives up to its name and takes the listener on a ride that goes wherever you want it to…

After listening to “Traveling In Stereo” several times, I can definitely say that it lives up to the claim of its creators; the album is indeed upbeat, it is witty, and it’s definitely sarcastic, but I won’t go as far to say that these are exactly good attributes. The standout qualities of Traveling In Stereo lie far more in the creativity and downright genius of Anitek’s musical production rather than Tab’s contributions lyrically. Anitek paints these beautiful soundscapes, a very lush backdrop of synths, samples, beats and acoustic instruments; the producer’s vast array of influences no doubt have played a role into the scope of his sonic imagination. As his bio mentions on the group’s website, he has played piano, cello, clarinet, guitar, bass and turntables for a collective 15 years, with musical influences ranging from Fat Jon and DJ Krush to Sergej Rakhmaninov.

Standout songs like Built From Scratch showcase both Tab and Anitek at their best, with the addition of a fairly good female vocalist, Elle Rose, in the chorus. Everything in this song works, from the simple verses to the very infectious hook, and of course Anitek’s brilliant production (take note of the nice rhythmic “kicks” he punches into the hook during “still tryin’ to find my way). Inquiring Minds is another very good track, but it’s a track like this where we see the strengths of Anitek and even Elle Rose, and the relative weakness of Tab’s delivery. Between his lyrics and even more forced delivery, I just don’t think this collaboration really works. It’s similar to how critics have come to talk about The Who, and the seeming great divide in talent (to some) between songwriter/guitarist Pete Townsend and vocalist Roger Daltrey.

The biggest failures on the album are without a doubt Booze Infused Wisdom, This Party Is Fucking Awesome, and Note 2 Self. What exactly is Tab trying to achieve in the lyrics he provides for these songs? It couldn’t be an attempt at humor or biting sarcastic satire, the lyrics are far too shallow to achieve that. It couldn’t be a sort of masculine posturing, which is typically and usually entertaining in hip-hop, the lyrics and delivery are far too tame to achieve even that. With both of those strike outs, what we’re left with is something sophomoric at best, and at worst, a weak suburban impersonation of what people would generally consider good rhyming, execution and gangster bravura.

Vocal failures and lyrical embarrassments aside, when this album is good, it’s good. The cool sounds of Anitek’s production and—at times—low key vocals, bring back memories of the very chilled out sounds of A Tribe Called Quest, most especially in tracks like “We’ve Got The Jazz.” Anitek really sells his talent the most on Ride And Fly, displaying a nostalgia draped in progressive aesthetic, especially with his interesting approach to turntable playing. I hope to hear a lot more about Anitek in the years to come. Traveling In Stereo should be checked out by all those with at least an iota of interest in the hip-hop genre.