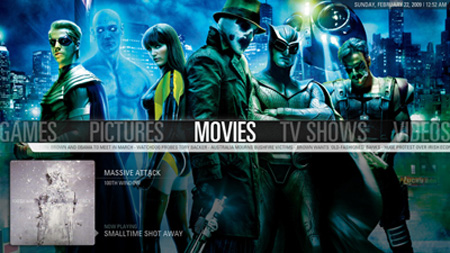 Finding the right software to play and organize your multimedia files can be quite frustrating – especially if nothing seems to work the way you want it. It can even get more frustrating when you actually use your PC as a home theater. Sure, you have the media player that comes with your operating system, but if you want more than that, the XBMC Media Center is the one for you.

XBMC Media Center is an open-source entertainment hub for digital multimedia files. It can function as a media player, but it also transforms your laptop or desktop into a home theater computer. With a wide array of support for remote controls, exquisite skins and various compatibilities with most file types, this software would definitely be stuck with you.

The XBMC Media Center is also designed for network use, so you can share all your multimedia files in a home or office network. It supports playback for most audio and video formats, VCDs, DVDs, Audio CDs, files inside ZIP or RAR files, or an image file. It scans your computer for media files and automatically makes a personalized library with album covers or fanart. It also includes a slideshow function if you want to ‘watch’ your pictures. It features a weather forecast capability and dozens of audio visualizations that will definitely make your music alive.

XBMC was created in 2003 by a group of programmers, and is now a worldwide project with over 50 contributors and 100-something translators who helped translate the program into more than 30 languages. The software is skinnable, which makes it aesthetically pleasing and looking almost the way you want it. People can download more skins in their website, as well as plugins and other scripts.

For somebody who is serious about his or her digital multimedia collection, especially for use in a home-theater computer, the XBMC is pure bliss. Not only it offers a great file organization, but it also makes your computer more useful with multimedia files.

You might say that the best thing with XBMC is that it’s for free – but there’s something better. The XBMC has stable releases for Windows, Mac/OSX, Linux, Apple TV and even for Xbox Live.

Transform your computer to an entertainment hub now!