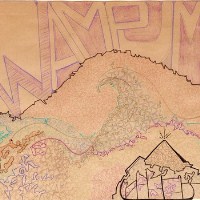 Wampun is the debut album of indie folk pop duo Eastern Phoebes. Made up of Ry Smith and Meg Bayley, the power couple formed back in January 2010. They started out with Ry recording songs he wrote and asked Meg to “sing and clap on a bunch of tunes.”
From them on, they have been unstoppable; recording and releasing several EPs, like Rods of Energy, as well as this full length record in just a year.

Wampum is their official debut and carries 10 heartfelt, catchy indie pop tracks that will surely become a soundtrack to your warm and lazy summer afternoons. The album was also the band’s official entry into the RPM Challenge.

Describing their music as “experimental rustic love-pop,” the duo recorded this entire album on February 2011 inside their loft apartment. Utilizing basic recording equipment, they managed to create a 10-track record that’s filled with beautiful harmonies, lush melodies and an overall dreamy atmosphere.

Opening with John Boyle Island, the song resonates with a lo-fi folk pop vibe. There’s a playful tone to it that makes you think of afternoons spent by the river, soaking up the sun and simply enjoying the great outdoors. Meanwhile, Worthless People and Plum Island Protest Song (F.T.D.)  are both easy listening tracks laced with quirky lyrics. Many of the songs are pretty short, mostly averaging around 3 minutes but each one flows with a carefree sound reminiscent of duo Belle & Sebastian only in lo-fi.

Recently, the duo has teamed up with guitarist/bassist, Rick Kattermann, and drummer, Frank Filipo, to help complete their lineup for live performances. It’s certainly a lovely folk pop record filled with twee musings about life and love. Worth the download if you ask me.