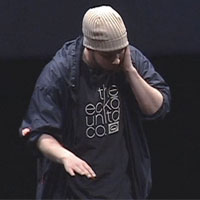 Yet another great vocal percussionist is on the loose! James “The AudioPoet” Burchfield had a funny, but jaw-dropping performance in TED Talks last February 2003. He not only showcased his talent in beat boxing, James WOW-ed the people by demonstrating his act of playing an imaginary turntable. He’s not your ordinary beat boxer; he calls himself an “audiopoet” for a reason. His different interpretation and his own created art of human beatbox gave new meaning to hip-hop.

Beatboxing is actually James’ first love. He started doing this way back his younger years. For him, it was all about creating his own art without any hesitations and hard to understand mathematical formulae. He’s actually an award-winning beatboxer in Seattle. His mimicry of sounds is simply extraordinary – a talent that places him outside the box of hip-hop.

In his performance, he exemplifies not only his matchless skill, he started his act with a little bit of humor. Honestly, at first you may think he’s kidding and not really certain of what he’s about to do, but when he began moving the imaginary vinyl on the non-existent turntable, the frenzy of clapping from the audience began as well.

“AudioPoet” holds classes for children who want to learn how to beatbox. It’s his joy to see the younger generation loving his art. His heart for what he does is actually a great example that young artist should imitate. Promoted by TED and licensed under Creative Commons, this is video is very fascinating. We promise this will make your jaw drop.