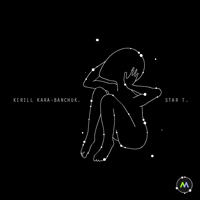 Another full-length LP released by Mixgalaxy Records acquaints the listeners with one very interesting author, who works both with music and graphical art.

Kirill Kara-Banchuk belongs to Russian idm flow. Being an expert in sound abstractions and experiments, as well as a talented minimalist artist he makes some kind of synthesis of inner images difficult for perception and interpretation, transferring them into sounds and sharing a part of his rich and individual inward with listeners.

Moods, atmosphere, tracks order and the album design are one big picture, resembling a road or ascend from darker deeps into the light, what was represented in the booklet.

Music is accompanied by one video clip, visually demonstrating ideas giving start to the entire album.

Dismal, black and white pictures, lonesome figures, pressing walls and overall estrangement perfectly illustrate the first track and prepare the listener for sinking into this very powerful and oppressive atmosphere, which weighs upon him in the first half of an album and changes into more comfortable and warmer sound environment as the release moves towards the end. Strong conception and solid realization provides striking impression on the lovers of genres such as idm, experimental and others of that kind.