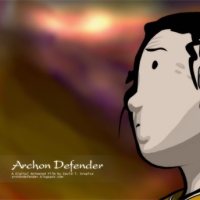 The 3D animation film Archon Defender is a one-man project by David Krupicz, who completed the film by working on second hand computers during his spare time within three years. The other people involved in the movie are only the voice talents, who Krupicz found with the help of a radio station.

I did not know what to expect from an hour-long animation film that is a product of one man’s creative input, from the story to the visuals, to the music, and everything else that needs to be creatively integrated into a film. Perhaps if I personally knew the filmmmaker, I would have had an idea that it would be good, but since I didn’t, I was simply awed.

Archon Defender tells the story of Collete, who would have been killed when she was young in a wartorn land called Echelon when Empress Lucia was spreading darkness and bloodbath in the land. Collete was lovingly protected and saved by her parents. She eventually flees and finds refuge in Archon, where she was trained and enlightened by the Archon Council. The story peaks when she becomes a part of the Archon Defense Wing and later on comes face to face with Empress Lucia. Collette was armed with her strength, which is a heightened awareness of who she is and what she can do. It turns out that Collete’s strength is the very weakness of Empress Lucia.

I would have enjoyed the movie more if the characters looked more real with graphic details of human features, but the generally vibrant colors and stunning frame designs made up for it, anyway.

The Archon Defender is a coherent film that would be appreciated by both kids and adults, except the kids have to be guided by adults in watching the film because of its violent scenes.

This film won the 1st place in Animation on SkyFest 2009 (Asheville NC).