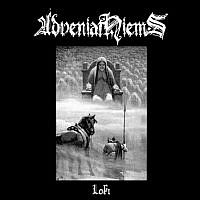 Adveniat Hiems is an ambient black metal band that dishes out short concept albums inspired by northern mythology and folktales. â€śLoki,â€ť Adveniat Hiemsâ€™ new EP, is named after a shapeshifter in Norse myths. The group is with the net label Ekleipsi.

They are not as loud and â€śnoisyâ€ť as other metal groups, and they do not blow off my eardrums. I think they are quite merciful despite an anagram of their name, invade atheism. I actually like the fiery combination of their drums and guitars. What I really like about Adveniat Hiems, though, is their choice to stick to concepts that are close to me â€“ myths and legends.

There are three main guys in the group: Aganush (bass), Ragno (drums), and Ishtar (keyboards). For the â€śLokiâ€ť EP, they were joined by Andrea on vocals. FrostClick had a chance to ask the band members about their odd-sounding names, and we found out that â€śRagnoâ€ť means spider, â€śIshtarâ€ť is a goddess of love, war, and sex; and Aganush is a mysterious name and their guitarist , who came up with the name, would like to keep it that way.

The band told us that they are â€śdeeply touched and involved by the evocative power of northern mythology and its sagas.â€ť Adveniat Hiems only wishes to express their nature and feelings into their music. â€śOur nature and feelings bring us to the heart of eternal winters, just right beside the giants, among the everlasting night of the Ragnarok: that’s why we choose to stick to these particular concepts.â€ť They are such a poetic group, as the words in the single and EP title â€śLoki,â€ť would suggest: â€śFor every death I die / I come back even stronger / For every day in hell / the more my soul gets forged.â€ť

My only issue with the EP is that every song sounds an extension of another, whether as a rise or a fall, the beats do not vary too creatively and so it is not great from repetitive listening. But if youâ€™re into dark metal infused with folklores and mythological characters, you should give this EP a chance. It will only take a little more than 20 minutes to listen to it entirely.