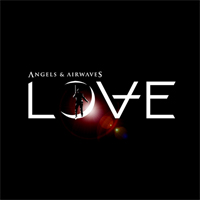 Angels & Airwaves give you Love – a free album download

I feel I should preface this review by saying that most Nu-Rock bores me. I kind of got over my rocker-girl phase as soon as I got out of high school, and to be honest I find that most modern rock bands don’t really offer much I haven’t heard before.

That’s why it surprises me so much that I absolutely love Love, the much-hyped brand-new album from alternative rockers Angels & Airwaves.

Angels & Airwaves are something of a rock superband, including such notable talents as Tom DeLonge of Blink-182, and drummer Atom Willard of The Offspring. And even if you’ve been living under a boulder for the past two decades and don’t know any of the musicians in the band, as soon as you listen to Love you’ll recognise the unmistakable sound of a group made up of successful professionals. Not only do these guys all know what they’re doing, they have the wherewithal to put together a highly-polished album that sounds as great as any major label offering out there.

But it’s not just experience and slick production values that make Love so likable – these are well-crafted songs that come from the heart. Despite the fact that Blink-182 have gotten back together, I like DeLonge’s vocals much better in this context, and the whole thing just seems very well-constructed and natural.

The album was originally supposed to come out last Christmas, but when the release date was delayed until Valentine’s Day, the buzz surrounding it grew exponentially. I kind of shrugged and said “so what,” but I have to admit, I now see what all the fuss was about. In fact, I like this album so much that I’m tempted to go back and get their first two releases, both major label discs on Geffen.

It’s interesting to see how many big players are doing independent music these days. It really drives home the idea that independent doesn’t necessarily mean amateur, and indeed Angels & Airwaves will begin a major tour of the US in late March. If you’re into live rock, I think this is definitely a show to go see, and if you haven’t already gotten your copy of Love, what are you waiting for? If a non-rocker like me can love it, so can you.

Although Love is a completely free download, all rights remain with the copyright holders.