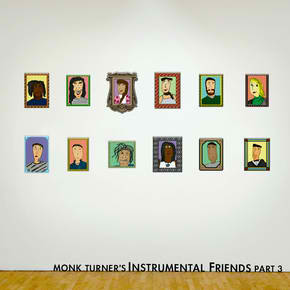 If you are a fan of indie music online, then chances are you’ve encountered Monk Turner and his quirky concept albums over the years. Time and again, he has given his fans something to rave about each time he releases a record.

Monk Turner is a true blue musician that takes sharing music to his core audience for free, seriously. He has done several concept albums and has appeared here at the Frostclick blog several times.

Instrumental Friends Part 3 is his latest effort. Monk actually auditioned his friends and inquired if any of them might be interested in participating in the album. The response was overwhelming but he managed to narrow it down to several people after a thorough breakdown. It mixes whimsy and some great music to create a record that’s truly one-of-a-kind.

The album comes packed with 12 tracks that features all of Monk’s friends. Opening with Kool Kwesi, the track exudes a bit of an 80s vibe with it. Kwesi is described by Monk as the friend that’s “weird, honest and large.” He also seems to be fond of Russian meteors. Bearded Bryan, meanwhile, creates an atmosphere of suspicion and mystery. On his little bio, Bryan is hailed by Monk as inquisitive and technical. He is ambidextrous and seems to prefer “freezing” temperatures.

Other cool characters to meet in this hodge podge, eclectic ensemble include Loquacious Larissa, Demented Dustin, Jocose Jose and even Judicious Jason among a whole lot of others.

If you’re interested in something new and like the idea of painting a musical portrait of a friend or person close to you, then this is a record to check out. There are plenty of great tracks that are definitely worth it.