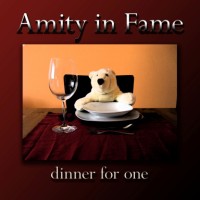 Acoustic rock music with clean vocals. There is no doubt that Amity in Fame’s strength lies in their energy and style. Though their songs might sound typical or even “boring” for some, it’s undeniable that their acoustic rock flavor is certainly something worth listening to.

With heavy distorted guitars and metal influences showing through, the band is able to create songs that no doubt “rock.”

Dinner for One is a professionally recorded and mixed album that shows the band’s true strength, their vocals and clean delivery.  Expect 10 engaging tracks from this album; it won’t take long until you find a personal favorite among this list.

Amity in Fame is made up of Fil on guitar / vocals; Michi and Judith on vocals as well, Willy on drums,  Roman  on bass and Alex  on Keys. Formed in the early May 2008, it wasn’t long after their get together that they came out with their first release.

Dinner for One was recorded and released by the band under a creative commons license last July 2008. It is noted as one of the most downloaded albums  in Jamendo and in fact, graced the top 10 most popular list for almost five months. Quite a feat for any independent artist to achieve.

Here’s how the band describes the tracks in their album:

“A 10-track album with some of the finest songs in acoustic rock-music. It starts with the smart-ass riff based ‘Dinner for One’ with its bombastic finish and one of the best end-screams of music history. This song is followed by the slightly engrossed ‘Haiku’ with a mosh-part you wouldn’t think an acoustic guitar is capable of. The next song, ‘Amity We Should Give’ with its melodic intro brings you down again and the smooth rhythm of the chorus gives you a feeling of lightness. Without going into detail about the following songs, it can be safely said that there are some real pearls of acoustic rock amongst them. Everyone will find some more songs to fall in love with on the album. The closer, ‘Touching your Breath’, finally is a real pleasure for your ears and your mind. It gives the album a warm ending and a feeling of coming home.”

Personally, it is a bit “common” sounding, but it is a sure pleaser especially for those who adore rock music and acoustic guitars.

Currently, the band is recording a new album slated for release this summer of 2010. In the meantime, give this a go and see if they make the cut for you.