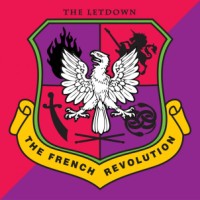 The French Revolution – The Letdown

Power pop rock visionaries claiming their stake on revolution. Sharing their penchant “love for rock music.” The French Revolution is striving to make their own splash with their upbeat rocking record The Letdown. Well, if there’s one thing these guys are doing right, it’s NOT letting their listeners “down.”

The band lineup has changed since this first album was released. From 7 original members contributing in the first release, they’ve narrowed it down to 4 official members for their upcoming 2nd album. Staples throughout the transition includes Daniel French on vocals and guitar and Jeremy Bentley on drums.

Lancaster, Pennsylvania may be an unlikely place to find a revolution but this is where The French Revolution hails from. According to their website, they are:

Make it available for everyone, they did. It’s possible to legally download their entire album on their website. The album is a reaction of both Bentley and French to the tiring “business side” of music. Turning their backs to the industry staple of signing under-a-label, playing-commercial-music and selling-tons-of-records-before-getting-recognized, the band certainly succeeds in doing things their own way. Moreover, they have a rocking great album to come along with it.

The Letdown includes such catchy tracks like Tell the Truth and their title track The Letdown. Now, the boys might not be “revolutionizing” the face of music per se, but they are certainly creating rock tracks that leaves every rock lover out there with a great time.

The French Revolution is certainly a band to watch out for. The obvious non-letdown of The Letdown is proof of that.