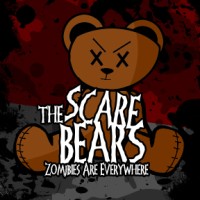 The Scare Bears: Zombies Are Everywhere

Be warned: contains gazillion explicit content, tons of metal, punk rock and lyrical comedy. From the funky video game intro in Girls Don’t Play, it’s hard not to laugh and enjoy listening to The Scare Bears.

Their music can best be described as a cross between loud metal, electronic and comedy. Most of the tracks do contain heavy cursing and cussing as well as overall dark content.  If you don’t mind it, you’ll definitely enjoy listening to Zombies are Everywhere.

The album is made up of 16 tracks with quirky titles like Banana and Dumpster Diapers. If you like heavy but fun rock and don’t have a big problem with cussing, then this album is worth checking out. With a band like this, you can almost expect that the members will have some sort of quirky nicknames. Sure enough, they do. The band is made up of Brian “The Cracker Kat” Damaged and Adam “The Monkey God” on vocals; Robo Bunny and Typical Panda on guitars; The Wolf on bass; Donkey Punch on drums and Funny Bunny on samples.

The band got together and started getting acquainted with the local scene back in 2003. Thanks to their onstage antics, funny animal nicknames, catchy riffs and varied musical tastes, the group was able to capture their audiences attention. The humor in the tracks are very raw and straight to the point that it’s hard to miss it. The band focuses on having a fun and providing a refreshing show every time. They also make sure to inject a sense of professionalism into their work.

Majority of the tracks in Zombies are Everywhere are pretty likable, thanks to the catchy riffs and loud rocking sound. A personal favorite would be Girls Don’t Play, Shooting Stars and PokeJohn. If you’re wondering, yes, the last track mentioned on that is a tribute to those adorable little Pokemons.