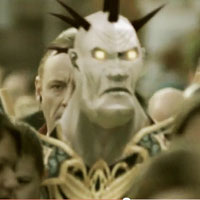 As we sit back and listen to the stories the camera takes us on a little journey through the rainy and monotonous city life following the characters of this story with a little catch – the characters have been digitally modified to look like their very own avatars.

For those who played WoW (World of Warcraft) before the short brings in a nostalgia for what have been and for those who are still avid players it brings excitement and a great depiction of what it means to be a gamer.
But the film also appeals to a broader audience as even those who have never played a game in their life will surely notice the great narration and sound combined with beautifully shot and edited scenes.

More than anything, however, the film provides us with an entirely new perspective on the gaming world as we follow the large Tauren blend in with crowds on the streets of Dublin, undead Warlock waiting in line of a grocery store, and see other avatars in the office, on a cigarette break, and taking public transportation. All of the scenes are accompanied by a voiceover narrative of each character detailing why they play the game and what their character means to them.

The only game I have ever played more than once was Jewels on my phone. Not a big gamer I know, but like the four people from Avatar Days I do spend a lot of my free time on other things, so I know what it means to be passionate about something.

I read a number of comments in response of posting the video on youtube and vimeo, and as many of the movies/documentaries on the gaming world it came with what seemed to turn into a long debate on the subject. As always, there were those who love the game together with a style of life it brings and those who don’t understand what it means to others. But the most important thing is that the debate continues and will only grow stronger as new technologies and software give the gaming world yet another amazing boost.