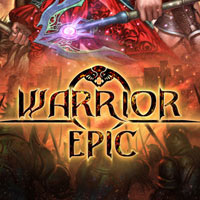 Warrior Epic is amazingly well reviewed free MMORPG game that let’s you direct an army of warriors through the wilderness to “recover ancient artifacts and fend off barbaric tribes carrying the wicked heritage of the warmongers of ancient times“. The 3D fantasy world is very imaginative, the graphics look amazing and the 50 something levels and tons of characters will keep you happily occupied for a long time! You can take “take command of a variety of Warriors through solo, PvP, and multiplayer dungeon-raiding adventures.”

Like every full fledged game production company, Possibility Space does make money. Warrior Epic is a micro-transaction based, which means that there are multiple game enhancements (like potions or clothing) that can be purchased from the games website. Nevertheless, Possibility Space stresses that none of the purchase items will give a gamer a significant advantage over opponents.

A beras once stood as a beacon of hope for a world filled with fear and terror. It was one nation alone yet surrounded by many that had succumb to greed and ambition. Jealous of Aberas’ endless prosperity and unhappy with their own ill gotten wealth, they launched an attack that destroyed this peaceful land…and themselves. 300 years have passed since the Great War that ended civilization as we knew it.

The technological marvels that fueled Aberas are still lost, save for rumors of relics hidden in the ruins and beyond. There are other rumors as well. Some of the wild tribes speak of a hidden kingdom. Good men and women, righteous men and women who knew what the Great War would wrought, fled and established a clandestine sanctuary. They turned their backs to the war mongers; their greedy brothers and sisters. In secret, they erected a hidden utopia: The Kingdom of Providence. The Kingdom is no myth.

Hundreds of years after the Great War, the sons and daughters of those brave men and women are now Providian Lords and they emerge to call upon you to restore prosperity to all. The despots of Osirka must be united in a common cause! Those brave enough to serve as Hall Lords will lead an army into the feral wilderness to recover the lost artifacts and spread the word of Providence.
However, the Providian Lords we not the only survivors of the Great War. It has become apparent that a dark power looms and waits to corrupt as it once did 300 years ago. It burgeons, it writhes, it cries out to those with weak wills; to those that would succumb to greed and jealousy…to evil.

This is no small task. Unite under the banner of Providence! The amount of Hall Lords rises every day and we grow stronger. Soon we will return peace and prosperity to all! Believe in Providence!