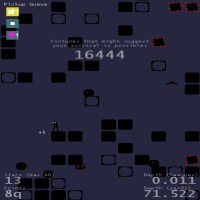 Probability 0 will definitely have you at your wits end. The game is a downward platform game that surprisingly has very little to do with probability but offers tons of options for you to experiment and explore. Levels of the game are randomly generated so you never get the same thing twice. Well, at least not all the time.

The game was created by Droqen, a TIGForums member. The idea behind the game is that instead of a health bar, your status is represented by a number. You start off in the double digits and as you descend and fight off baddies; the number decreases. It goes down considerably if you take a hit. It’s your job to stay alive, fight off the enemies and keep the number from hitting a zero. This simply means that your probability of staying alive is zilch. Give it a try, it’s definitely worth your while. This cool platformer sees you scrolling downwards while everything seems to be going up. At the onset of the game, you’re immediately acquainted with the controls. You can press Z to jump while pressing X lets you punch or throw ninja stars at your enemies. If you press spacebar, you’ll be taken to the upgrades menu.

Initially, you will be asked to choose between two game settings. First, you get Talent, where you are provided a set of skill points that you will need to distribute yourself. Second, you have Potential. For this one, you don’t have skill points to begin with. Instead, you will only gather up points as you go ahead and kill the enemy.

Whichever you choose, each skill points allows you to purchase off an ability that your little character can have. Most of the abilities will make your descent so much smoother  and fighting off bad guys much easier.

Anybody that’s played the game will attest that when starting out, you need to be prepared to die, a lot! It’s not so much that it’s difficult to master but there are very little options for you to defend yourself that it’s difficult to actually keep yourself from dying. Once you do reach a good level with quite a few abilities under your belt, then you should be just fine.

As for the graphics, it’s quite basic but very playable. The soundtrack is also pretty good and definitely lends to the adventure feel of the game. Give it a go.