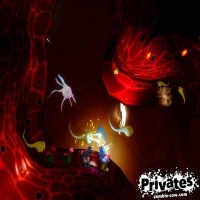 Rated 14+, Privates, is a Zombie Cow Studios shooter game developed and released last August 2010. In the game, you lead a bunch of marines down, er, private parts to eradicate traces of sexual diseases. If you find battling chlamydia and herpes down the fallopian tube as interesting, then read on.

The game is an unusual take on biology class, that’s for sure. The game was rumored to be released on Xbox Live Indiegames, however, a spokesperson for Xbox has confirmed that they haven’t received the submission yet. If reports online are to be believed about the content, he added, that it would probably not make the guidelines they have for sexual and explicit content in their games. Well, Xbox or no Xbox, at least you can enjoy this game for free download. Happy hunting!

Despite its raunchy premise, the game features great graphics, nice gameplay, funny dialog and cool soundtrack. The game sees you leading a group of condom-hat-wearing marines, hunting down all sorts of nasty stuff down under. You’ll encounter loud monsters, smelly oozes and other types of critters as you go exploring these different places.

You’re going to have to blast your way through invading sperm and pubic lice using your spermicide ammo.  Then find yourself heading for various other “deep, dark places” until you finally encounter and fight off the HPV boss.

The game provides five levels of critter blasting, all in different gorgeously rendered environments. With awesome locations, comes a great script to match. The script is quite funny, very satirical and quirky. Moreover, the game is also designed to teach you a thing or two about how to handle situations like these in real life.

Anyway, the game is definitely fun and enjoyable despite its gross-out humor. The game has also been getting rave reviews online prompting talks of a free extension to the game which will hopefully be out by next year.