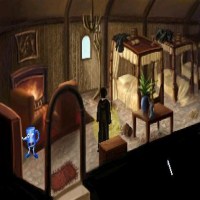 Even though Harry Potter has officially ended, its legacy still lives on. Just take a look at the countless merchandise and spin-offs that remain. Speaking of spin-offs, Warthogs is one of the many tribute/parody games celebrating the story of the young boy wizard.

The game was created by Crystal Shard and is a few years old but trust me, every second is still worth playing. In it, you play as Larry Lotter, a slacker who’s about to take his final exam. The only problem is that Larry spent the entire night partying and is now late for class.

Instead of a hero, Warthogs lets you play as a semi-delinquent/alcoholic wizard who is not very keen in studying. As a result, he ends up missing an important exam. However, his luck is about to change. After encountering a mysterious presence, Larry finds himself to have the power to turn back time, giving him another shot at taking his exams and actually passing. Of course, the game won’t be complete without his best buddies, Rob Greasley and Calliope DeRanger. Even Professor Mumbledore makes an appearance in this funny parody.

The game features really nice graphics, similar to what you would expect big name studios like LucasArts might come up with. There’s also an added realism to the game by having the rest of the characters interact and talk to each other while you go about your business. Controls are very simple and the overall story is very entertaining.

Since its release last 2006, the game is still gaining new followers everyday. It’s been translated to several different languages including Hungarian; great proof of the allure of the drunkard boy wizard. Give the game a try.