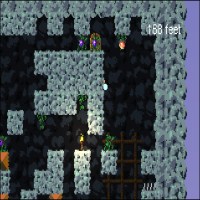 TowerClimb is an interesting game created as an entry for GameJolt’s Rogue contest. In the game, you will be playing some random explorer whose goal is to reach the top of an endless tower. The levels are randomly generated so you never know what you are getting.

The game is done using Construct. Gameplay is basic, all you have to do is climb, climb and climb some more. You simply have to watch out from the pitfalls of climbing without a harness and of course, other things that might be waiting for you downstairs in case you do fall.

Game controls is simple. Aside from the arrow keys for movement, you can press X to let your little climber jump off platforms, scale walls like Spiderman and even crawl through the ceiling. You can also pick up items on the way and some of them you can stuff in your inventory for use at a later time. There are merchants randomly situated in the levels. You can trade in some of your berries for new equipment that you can use for your climb. Occasionally, you will encounter purple berries that give you the ability to double jump.

The game pretty much relies on how much resolve you have. If you’re the type of gives up after seeing that you can’t make your character climb more than 50 feet, well, you might not enjoy this game. However, if you are one of those hardcore gamers who simply won’t back down on a challenge, TowerClimb could prove to be interesting.