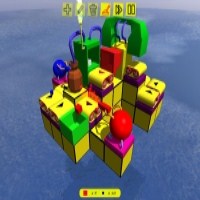 The Machine is a colorful new game that you can download and play for free. Even though it’s just a demo, it’s still pretty entertaining and worth checking out. The game is very logical so don’t expect to figure this one out via hit or miss.

In the game, you are an assigned engineer who creates blocks, both colored and not colored. Your job though consists of creating a machine to create the blocks that you need. You’ll have several parts at your disposal that you would need to assemble and put together the machine in order to start production.

You’ll need to figure out which parts go to which sections. Controls are simple. Use the mouse to select the placement, while WASD or the arrow keys can be used to control the camera. There are also fast forward and pause controls if you want to examine everything much better. Graphics for the game are in 3D. They are a bit chunky, considering that you’ll be building blocks but it gets the job done. Sound effects are pretty good though.

Overall, the game is entertaining and perfect for anybody who loves puzzle games. It might be simple and can definitely be improved further but it works, nonetheless. It was developed by Bumpkin Brothers and is offered for a fee if you want to play a much longer version of it.