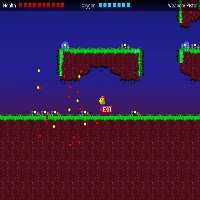 In Blob Wars: Metal Blob Solid, you get a chance to play, Bob, a highly fearless Blob agent. Your goal is to rescue as many of your comrades as possible. Of course, you have to do everything in stealth or else you would need to fight of a lot of alien scum as well as the evil leader, Galdov.

Blob Wars is a 2D arcade platform style game that features cute graphics. However, don’t be fooled by their cuteness; the game does feature some blood so it’s best to caution children. The game was created by Parallel Realities and borrows some elements from games like New Zealand Story and Ape Escape. The game has a nice gameplay and features tons of weapons, boss battles, and location. The entire game has about 9 hours worth of gameplay which is more than enough to satisfy any gamer. As mentioned, the game might look like something perfect for children but there is blood. Of course, you can tweak the setting so that they won’t show.

Obviously, any gamer would notice the wordplay on the title. It is based on Hideo Kojima’s epic game, Metal Gear Solid. In fact, originally, Bob the Blob was supposed to be named, Solid.

If you are looking for something more interactive, you might want to check out its sequel, Blob Wars:  Blob and Conquer. This sequel is done in 3D and yes, the title is taken from Command & Conquer. It’s storyline is set just eight months after the events of the first game.