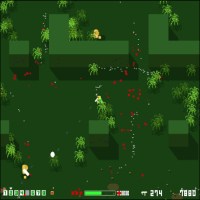 Ranger is the latest game released by Netherland-based developing outfit, Foppygames. This one is another fun adventure platformer where you get to play a pilot on a reconnaissance mission against hostile and unfriendly aliens.

You’ll need to navigate yourself through the many doors, looking for the hostages and rescuing them. At the same time, you’ll need to defend yourself against the feisty aliens out to get you.

This game was created using Blitz 3D. There are also several other freeware games offered by the developer on his site so after you’re satisfied with saving all the hostages as well as killing all the alien kidnappers in this one, go ahead and check out the others as well.

Playing a hired gun isn’t so bad. You get to travel to different planets, play the hero and save the innocent and of course, go on a rampage on any alien scum you want. Plus, you get paid! Ranger lets you do all that and more.

Even though you start off with a small selection of weapons and a med kit, the game allows you to easily pickup various weapons dropped by your enemy as they are killed. Maps are provided so you can easily navigate your way around the camp. Be careful about navigating your way though. The lush forests can easily protect you from enemy fire but it can also hide enemies so it’s best to always be on your guard.

Rescuing the prisoners doesn’t end with you finding them. After you locate them, you’ll need to guide them back safely into your ship before the mission ends. Leaving a planet without the hostage though is possible, but this means you won’t get any additional weapon bonus when you begin the next level.

Controls for the game include M for applying the med kit. Pressing the number keys or using the mouse wheel allows you to select weapons while pressing F orders the hostage to follow or stay put.

Ranger is quite a fun game, however, you might find it boring if you’re looking for a challenging shooter game that requires you to do some tactical shooting – the game isn’t all that difficult. In fact, it’s fairly easy to complete especially if you already know your way around shooter games. Nevertheless, it’s perfect if you just want to relax or waste an hour or two from your day.