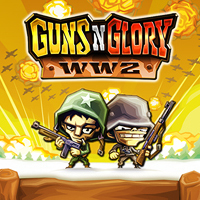 Soldiers, the time has come to tie-your-laces and load the guns. Yes, it is time for war and full destruction of enemy forces. Guns’n’Glory WW2 is another awesome war-combat game, but this time around with its own awesome twist.

Created by a top developer on the Android Market, Handy Games has brought to life some of the most entertaining titles on the scene today. With Guns’n’Glory, they have outdone themselves altogether.

Guns’n’Glory WW2 is a highly rated action-strategy game that allows players to grab their bazookas and ready their grenades. The game is serious this time as it is WW2. So players, its your choice to choose between Axis or Allies and change the game entirelly.

The game has some really awesome features loaded to the gill, such as the players with the ability to choose between U.S Forces and Axis Germany, 4 different units to recruit on each side of Allies and Axis, a major mind-blowing arsenal is also up for players to select. Furthermore, RPG game fans will love the heady dose of skill system integrated within for the perfect gameplay feel with advancements.

Guns’n’Glory WW2 features 12 highly-challenging maps with 3 difficulty modes to choose from. On the visual front, the game will be a arcade fans delight due to the punchy colors that has been thrown-in. Even the effects are great and give players a total war-like feel on their device screen. Players can make tactful decisions for that crucial blow on the enemy, from calling air-strikes, collecting supply crates, giving medic attention to their soldiers and the likes.

Overall, the game really surpasses the original installment of Guns’n’Glory and this one takes game-play to the next level. Only available on Android at present, every Droid gamer should adorn his/her app drawer with Guns’n’Glory WW2.