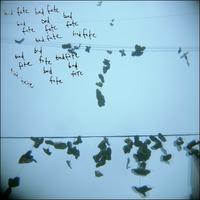 Fairly new in the music business, Bad Fate, releases a debut record filled with raw emotions, noise and a good amount of energy to keep everyone beaming happy. Production values might not be top notch on this one but it certainly has a rawness that is fresh and interesting.

Olympic City comes with seven noisy grunge tracks juxtaposed with beautiful feminine shouty vocals (occasional male vocals too). Think Chrissy Hynde if she decided to scream her way through most of their songs.

If you are not into noise, then this album might be better left alone. The album is a great mix of noise, distortion, feedback, with garbled lyrics spewn out in between cute vocals. Olympic City is one album that’s made up of energy and spunk; making first time listeners want to listen and find out more about the band.

Opener, This Olympic City, is a lovely fusion of grunge, noise and sweet female vocals courtesy of Kate Grave. Even though it’s hard to tag a melody to this song, the rawness of it is enough to make you love it. Strathcona has a more new wave influence. It’s accompanied with jangly guitars, simple drumming and very Stroke-esque vocals. One of the songs you can easily bounce around in without much coaxing.

Overall, the album is one big hodgepodge of sound. Worth checking out if you love noise rock, grunge, new wave and everything in between.