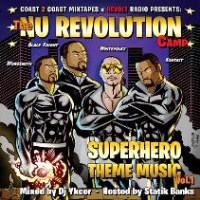 What do you get when four of the best indie/underground artists form a crew and release a mix? Well, you get an indie hiphop supergroup. The Nu Revolution Camp, headed by Frostclick resident, Wordsmith, along with Kontact, Black Knight and White Folkz take underground hiphop to an entirely new level. Super Hero Theme Music Vol 1 is the first of several mixes from this talented crew.

Just like superhero’s, they breeze through rhymes like Superman sees through lead  and drop beats like Batman knows Gotham City. It’s definitely a fun album worth checking out. It’s all about cool beats, amazingly tight words and definitely plenty of fun.

Opening through the record with a simple spoken intro and bursting through some serious rhyming; Microphone Bully Brigade is an awesome opener that sets you up for the onslaught of the “superhero” crew. It’s followed by, Pressure Cooker; the first officially leaked cut from the record. The track itself is quite smooth with great vocal work from Wordsmith and crew.

The Freedom Theme sees the crew talking about how they would achieve freedom in their own way. It might seem trite at first but the single is quite interesting and has a nice catchy beat along with it.

There’s really nothing  to complain about in this record. It’s tight and features one fantastic track after another. The beats are not just catchy but very classy in most parts as well. The lyrical banter is perfect and you simply get a crew that works better than the Justice League. Definitely worth checking out if you’re looking for an album that features one great single after another. This one’s a keeper for sure.

There’s an accompanying video for the single, Pressure Cooker, directed by Chop Suey Films.  Watch it here and give the album a download.