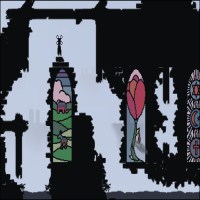 If you are looking for a nice little puzzle platformer to pass the time, then Glum Buster is your best bet. The game is rather odd but its oddity is what makes it interesting in the first place. The weird thing is that there’s hardly any explanation or instructions given in the game. Hence, players are forced to experiment and explore the various areas surrounding them.

Glum Buster was created by Cosmind and took four years in the making using the Game Maker machine – it seems quite worth it. Glum Buster is a rather unusual platformer, but it’s gameplay is simply fun and quite enjoyable.

The entire game relies on heavy exploration and puzzle solving. Some of the puzzles are quite easy to figure out while others will give you more than your fair share of headaches. As for the storyline, it’s quite different as well. One minute you start off in a rainy street and next thing you know, you are on your way to a completely different world. It’s rather bizarre and don’t count on an explanation because there’s none.

The game controls run from the basic arrow keys to using the mouse buttons (left or right, sometimes both) depending on your needs. The left button shoots a red fire thing at any target you want while the right button acts like a magnet, attracting certain objects towards you.

The puzzles are sometimes simple but there are also times when it can become testy. With the lack of game hints or even a sensible idea about where to go, hard puzzles can easily become annoying. You’d be stuck in that level not knowing what to do or where to find the solutions.

It’s weirdness is also its appeal, hence, it’s definitely a game worth trying; whether you figure out what to do or not.