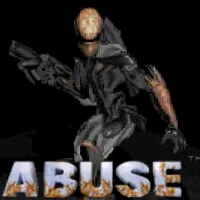 Abuse belongs to a run & gun type of games and is nothing new in terms of the storyline. The uniqueness of this game lays in the controls – you use the keyboard to control your Nick and the mouse to aim and shoot.

The game came out in 1996 for DOS and Linux and shortly after the source code and shareware assets were released to the public domain. An improved port of the game was released for Mac OS by Bungie Studios and for the Acorn Archimedes by R-Comp Interactive. Jeremy (Marauder) Scott has ported it to run under Win32/DirectX, and others converted to code to run on AmigaOS and even on iPhone (although I can’t seem to find the installation files for systems other than Windows).

The graphics are not very impressive, even for a game from the mid 90’s, but the control system & arcade style constant mutant killing make it the perfect lunch break stress relief game. The download package we linked to above is for Windows computers and also contains a level editor – just in case you want to go a step beyond some mindless killings.

I couldn’t find the minimum requirements anywhere, but I bet they are pretty low 🙂

If you find other download packages that would be of interest (for other platforms, for example), please comment below and we will add them to the post. Enjoy.