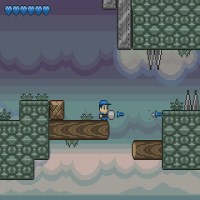 If you ever wondered what happened to those buggy Action 52 games released for SEGA back in 1993, wonder no more. Arthur Lee, with the help of pro game developers, has taken it upon himself to remake these games and add a modern flare to them. So far, 9 games have been given new life and one of these is Jigsaw. The game was remade by indie game developer, Miles Drummond.

The result of his efforts is an interesting platformer that’s filled with fun puzzles. Reminiscent of the Nails ‘n’ Scale game back in the day.

The effort resulted in a cool game that contains fun gameplay with retro graphics. It’s a bit short but enough to keep you busy on your break time. In the game you play a sort of handyman with a gun that fires nails for a weapon. You go through the levels (just two to be exact) using your gun to eliminate the enemies that you encounter. The nail gun can also be used to fire off nails on the wall in order to create a stepladder that you can use.

However, it’s important to take note that you can only fire off three nails at any one time. If you fire a fourth nail, for instance when scaling a wall, the first nail will disappear. This is also where the puzzle part of the game comes in. You need to place the nails exactly where they are supposed to be so you can successfully overcome the obstacles. There are also quite a few switch puzzles to keep you busy as well.

Overall, the game is perfect if you got an extra hour or so. Heck, two levels might not even reach an hour. Nevertheless, it’s a fun game to play and indulge in.