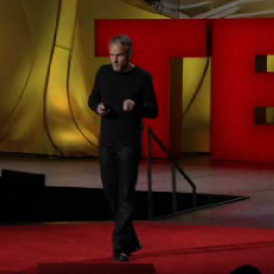 Eythor Bender of Berkeley Bionics brings onstage two amazing exoskeletons, HULC and eLEGS — robotic add-ons that could one day allow a human to carry 200 pounds without tiring, or allow a wheelchair user to stand and walk. It’s a powerful onstage demo, with implications for human potential of all kinds.

Eythor Bender is the CEO of Berkeley Bionics, which augments humans with wearable, powered and artificially intelligent devices called exoskeletons or “wearable robots.” User of the HULC (Human Universal Load Carrier) can carry up to 200 pounds for hours and over all terrains. eLEGS, an exoskeleton for wheelchair users, powers paraplegics up to get them standing and walking.

Bender has fostered innovation with bionic and orthopedic technologies throughout his career, taking them from unconventional approaches to sustainable, FDA-approved products that help individuals participate in their community. Such was the case with the boomerang-shaped prosthesis Cheetah Flex-Foot by Ossur, worn by the history-making bilateral amputee Oscar Pistorius. Bender’s team fought for, and won, Pistorius’ right to compete in the Olympics.

“Seriously, everyone: a soldier just walked onto the #TED stage wearing a functional exoskeleton.”
@hodgman