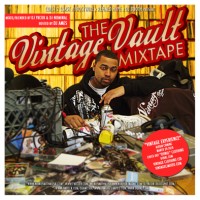 He’s back!!! Mr. “more than a million downloads”, Wordsmith, is back and has let loose 15 tracks from his personal archive; compiling them into The Vintage Vault Mixtape. Giving his fans something to satiate themselves while waiting for his new album, Vintage Experience, to hit shelves on March 30th.

As expected, Wordsmith delivers tracks filled with expressive lyrics which coalesces perfectly with equally diverse rhythm and beats.  A true rapper/actor (he has a degree in theater  to boast of) Wordsmith effortlessly strings together words and phrases creating meaningful lyrics rather than just spitting out meaningless rhymes.

The Vintage Vault Mixtape is a compilation of old tracks that the artist is finally letting loose from his personal collection. It’s filled with collaborations with talented local and International MCs like Manny Mascow and Genesis Elijah as well as other artists like Cyrano, Whitefolkz and so many more.

Not only a gifted rapper but a talented theater actor as well, Word first got struck with Hip Hop Love when a family friend lent him and his brother, Professa, a collection of his rap tapes. Pretty soon, his folks took notice of their increasing love for rap music and surprised them with their first stereo. This present came along with Run DMC’s “Tougher than Leather” as well as The Fat Boys “The Fat Boys are Back” cassette tapes as a bonus.

Wordsmith’s love for classic hip-hop is evident in each of the tracks on the Vintage Vault. Moreover, each track contains Word’s signature storytelling lyrics. For instance, God’s Morning which was produced by his own brother Professa, narrates about his personal musings on life. On the other hand, Hook-up Hotline is a classic, feel good hip hop track which showcases that 90s , old school Hip Hop.

Listening to each track lets you catch a glimpse of Wordsmith’s awesome creativity, passion, and charisma. He translates his passion into his lyrics and beats giving you music that’s suited for almost every Hip Hop lover all across the globe.

He’s slowly making his mark on the hip-hop world, but has definitely gained solid ground in the underground hip hop scene. If you are a fan of old school beats that you can play back in your car as you ride on a nice, warm afternoon, then better pop this one on. It’s well worth it and more.

This work is licensed under a Creative Commons Attribution-Share Alike 3.0 United States License.