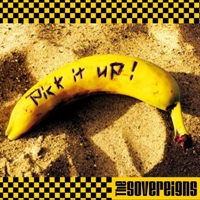 The Sovereigns: Pick It Up

I find it more and more difficult to come accross punk bands which sport the punk genre in a legitimate sense. However, recently, my ears have been rewarded with some of the scarce spoils in which rarely become available to a dedicated browser like myself. The album ‘Pick it up’ by ‘The Sovereigns’, resurrects the late 1980’s/early 1990’s version of ska-punk that many believe to have died long ago. Hysterical drum beats (with a tempo range between relatively fast to extremely rapid), catchy brass sections, walking bass lines and power chords strummed from a fanatically distorted guitar help to ensure that all of the desired boxes are ticked. These aspects then conglomerate to form a sound similar to that of Anti-flag, NOFX and Reel Big Fish. Additionally, the bands vocalist portals politically motivated and humorous lyrics through a rough and husky voice – while he also manages to stay in key. This deems the Sovereign’s music worthy of a wider audience and saves them from being restricted to only those of the traditional punk scene.

The opening song ‘Pick it up (and run)’ offers a short and simplistic introduction to the album, while a lesser focus on vocals helps to embellish the technical abilities of the bands remaining instrumentalists. When looking for a new band to listen to, I normally base my judgment on the first song of an album. I believe that this should be used as a device in both setting an overall mood and creating a basis for assessing the albums worth. This song certainly exhibits both of these aspects, while it also captures the audience’s attention with minimalistic and catchy melodies. Other songs in which deserve a special mention include: ‘Sex and Modern Drugs’ and ‘Pirate Mutiny’. In my view, these are the catchiest and most polished songs on the album. ‘Sex and Modern Drugs’ best conveys the musical characteristics expressed earlier, while ‘Pirate Mutiny’ provides a ‘slightly cleaner’ and contrasting midway break. This is accomplished through slow and mellow verses and a respectable ‘sax break- down’.

This album is a must-have for all punk fans and those who dabble in this genre from time to time.