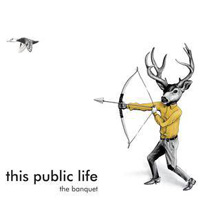 This Public Life: The Banquet

Coming from Melbourne, Australia, This Public Life makes their way to the musical spotlight through their acoustic driven outfit. But do not get fooled by their south-eastern suburb origins because they offer tunes with the industry credibility of the alternative and underground culture. They are heavily influenced by bands like Interpol, Sleepy Jacksons, as well as Turin Breaks and The Doves so you can expect the same sentiments from This Public Life.

The Banquet is a six track album from which they have conceived the cover art from a constellation reference.

It kicks off with Smile, a five minute soundtrack that already garnered more than 17000 listens around the world; the central theme of which is about getting up again whenever we fall down and asks the question “what is the sky for?”.

Gypsy talks about life lessons matched by the band’s Australian accent and heavy guitar riffs and solos prove to be a very good country side style song with a dash of indie-ness in it.

The album tops it off with War Machine that begins acoustically and then gradually adding more instruments to finish it alternatively.

All in all, The Banquet is a must listen for those who want light-hearted rock music that conveys deep meaning and implications.