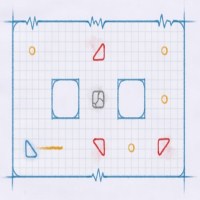 Single button games should be easy, right? Besides, pressing one button to play and defeat the entire game can’t be that hard. However, Ichi might just prove this theory wrong.

The game is a one-button puzzler from Jay Van Hutten and it’s main premise is simple. All you have to do is collect the different yellow colored circles or balls inside a maze. This might seem like a no-brainer and it is, until you get to the higher levels and realize just how complicated it can get.

Ichi comes with a sketch-like graphics reminiscent of Crayon Physics as well as a nice soundtrack provided by Michiel Nijhof.

You can only use one button throughout the game: the spacebar. By pressing it, you can maneuver the ball to go off in different directions in order to collect the rest of the yellow balls located within the maze. One of the  nice things with the game is that it allows players time to understand and get comfortable with the rules by having the first few mazes as simple as pie. Then it progresses into more complicated ones. Making sure there’s enough of a challenge for players.

Ichi features straightforward but effective graphics. Being a simple game, the minimal design is perfect. The looping background music also creates a good complement when you’re playing. There are 15 levels to the game. You can even finish it in under an hour if you can quickly grasp the concept.  Overall, it’s a nice game to try out. At under 20 MB, it won’t even bog down your hard drive.