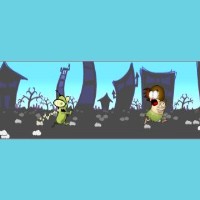 I’m a little bit torn whether to recommend this game or not… On the one hand, the game’s evil bean looking character is pretty entertaining as he runs after this woman with a child and won’t let anything stand in his way. On the other hand, it just seems too odd and disturbing.

Restraining Order is also filled with broken mash up of background tracks about love, violence, incest etc. This makes for a dark comedy yet disturbing side scrolling game. Well, if you want to try it, go ahead, but don’t blame me if you find it just a little too much for you.

It won’t take you long to realize that you are the bad guy and that you are probably doing something really awful to the woman and the daughter to make them run away from you like mad. Thus, as you finally manage to catch up with them, you will either feel this deep guilt or horror just thinking about what’s waiting for them. Of course, the game creators were wise enough not to define this part, otherwise there would be a barrage of complaints against this game.

Anyway, you do get caught at the end of each level, and yes, it is meant as a comedy but it is still disturbing somewhat. Despite the premise, the gameplay is quite fun and easy. All you have to do is fend off either red, blue or yellow policemen as you chase after the wife and daughter.

All you have to do is punch the blue policemen, dodge the red ones and simply jump over those in the yellow uniform. Overall, the game visuals are quite good. It’s definitely smooth and easy to handle.

If you don’t mind playing the “scourge of society” and don’t have an overly active imagination filling you with dread at the thought of being an abusive father, then you might actually like this game.