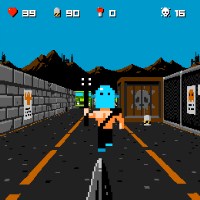 You can say that 8bit Killer is like playing an NES game. The fact is that it was made to look exactly like an overhaul of an NES game. It features the same graphics and gameplay style that fans will definitely feel as if they have gone back in time.

The game is set in AD 2488, in a world where the human race is bracing on extinction. In the hands of Master Brain, the world is being threatened and now, a group of humans have formed to combat this growing evil. The game focuses on the final mission for these group of soldiers.

If you are looking for a nostalgic yet awesome NES-like game, then you’ll definitely find it here on 8bit Killer.

Okay, so the game has a simple premise and the gameplay is quite basic, but the game excels in its simplicity and has a penchant for creating nostalgia. It features typical controls; using the arrow keys or WASD to move around.

The graphics are done in 8-bit which to some might be annoying. However, in the end, it is quite appealing even if you prefer the more fleshed out renderings. The music is amazing. It definitely takes hints from awesome games like Contra and Bionic Commando without losing its own identity.

Other features to expect in the game include: 8 sublevels and 5 boss battles; visible enemy bullets; and hidden bullets as well as weapons to name a few. You get an hour’s worth of gameplay for this one yet there  is no savepoint. Hence, you would need to clear a good portion of your afternoon and finish this in one go.

Thankfully, this doesn’t feel like a burden at all. Who would have thought that such a simple and basic game could turn out so much fun!