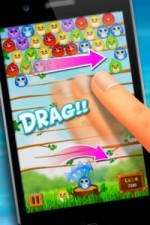 iOS has largely become a hardcore gaming platform, but casual gamers can still get their dose of fun with Fly Bird HD 2.0, which defines casual gaming in the best possible way.

Developed by BlueOnionSoft, known for the best in casual gaming, Fly Bird is a mix of Brick-breaker, Angry Birds, and Jewel Tetris. Yup, a classic combination. Detailed reasoning after the break.

Angry Birds has made the war between pigs and birds a really hot product. You guessed it right, Fly Bird HD also revolves around the rivalry between pigs and birds; the main reason for comparison. Then we have the game’s objective – to eliminate three or more birds sporting the same color; here comes in Jewel Tetris. Brick-breaker I say, because players have a support below the branches – an arrow pointing towards the birds.

With the graphics more than reminiscent of Angry Birds, I would highly recommend this game to anyone looking to kill time on way to work, college or simply in between of errands. Nothing too serious about this game, just loads of fun. Fly Bird HD 2.0 is an universal iOS app (runs on iPhone as well as iPad) and syncs with game-center, for the gamers who love to brag.

Overall a nice game with friendly controls and not to forget, some very cute, and adorable looking birds.