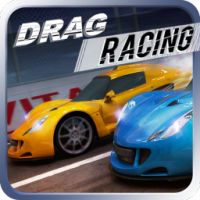 Another yummy offering for all the racing enthusiast on the Android and iOS platform. It is time to fasten your seat-belts and zip-zap-zoom through fast tracks on Drag Racing. This game sacrifices the high-end graphics for an in-depth gameplay with intuitiveness and addiction as the focal-point.

Developed by Creative Mobile, people who have brought some fine-gaming action on a platter to the mobile scene more than once, Drag Racing stands as a fine example of their quality apps.

Drag Racing is the pinnacle of the racing-game genre, in terms of multiplayer support, number of cars, tuning, controls, gameplay and the likes. Everything feels very fresh and adds to the adrenaline factor. Drag Racing features over 50+ cars and now includes the officially licensed 1200 BHP 1200 bhp Hennessey Venom GT. Moreover, for a better racing experience in higher levels, players have the option to fine-tune their cars by purchasing tuning kits, upgrades and various customization.

While the gameplay is unique and intuitive, it does take a bit of time getting used to the entire mechanism. Like in a real-life race situation, players need to keep a close watch on the RPM needle, because too much of a wheel-spin and you just make no progress. The winning strategy lies behind the technique the gamer follows, advanced players will just love the thrill this game has to offer.

A feature I found the best was the ability to test the car before purchasing. Wow, this is the touch of realism that the developers paid a lot of attention too. Also, the higher is the cost of the car, tougher is the race for the competition; online and offline. The cost is not determined by the stock condition, upgrades also add to the entire cost factor of the vehicle in the game. Also, the ability to edit and tune the gear-ratios is just great.

The game has a handful of achievements and those can be unlocked by regular racing or just going head-to-head with the Boss. Unlike other racing games, Drag Racing does not force players to go the In-App purchase way, but focuses on earning cash by burring rubber on the track.

Overall, a great game, nothing much on the graphics part, but great gameplay, techniques, and cars. It is like a Pandora’s Box, only which is meant to be opened and explored. With installs between 10,000,000 – 50,000,000 and 190,000 ratings on the Android market, you just cannot go wrong with Drag Racing.

Very soon the developer is coming up with Drag Racing: Bike Edition to satisfy the bikers hunger, and social-networking addicts will get Drag Racing on Facebook and other sites soon.