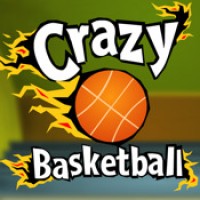 Another crazy, fun, and casual gaming session has invaded the iOS platform and it is called Crazy Basketball. This one takes the cake as far as casual gaming goes with a heady mix of smooth gameplay, cute characters, cartoon animations, groovy in-game music and plethora of unlock-ables.

Developed by Yogamen Inc., the company already has quite an impressive variety of releases for the iOS gamers and does quite a commendable job with Crazy Basketball.

The game is no rocket-science compared to the iOS high-enders, but is filled with an intuitive gameplay and everything has been kept subtle and simple. Something some old-timers will love and applaud; firstly, the game supports three unlocked modes, 1) Classic Mode, 2) Training Room, & 3) Hoops. All three modes make use of the main game background, though the training room and Hoop mode do not feature an audience. The game supports two additional modes, namely Crazy Mode and Sniper Mode which can be unlocked for $0.99 via an in-app purchase.

The Classic Mode is the main game with a very nice “Slow Motion” feature thrown-in. Players get a total of 2 minuets to score the maximum points, with every successful long shot a +4sec bonus time added to the timeline. The audience is something really to talk about with all characters sharing an uncanny resemblance to the “South Park” residents (The game characters are just a little taller) and cherring, “Wow”, “Cool” and “Awesome” with every successful shoot.

In the hoops mode, players are given three shot types; 3 point hoops, 2 point hoops, and 1 point hoops. Players get a total of three shot per hoop, making it a total of nine shots in the Hoop Mode. This is a fairly simple mode, with the ability to score huge and then share it through OpenFient or the more iOS friendly GameCenter.

Social-networking addicts will love the ability to brag about their high score on Twitter and Facebook after signing-in with OpenFeint. Also, the game has a bunch of backgrounds which can be unlocked by achieving certain scores in the classic mode. Overall, a great time-killer game with a nice touch to it. If you are on your way to work, have free-time, or simply bored, Crazy Basketball should feature on your iPod or iPhone.