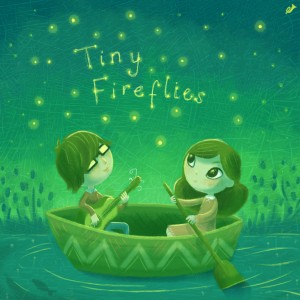 This tiny release from October of last year might include only three tracks but since all of them got an instant pass to my lovely iTunes library I thought that they just might find their way into yours. In reality Tiny Fireflies are Lisle from the band Fireflies and Kristine from Tiny Microphone. However, together as a duo they call themselves Tiny Fireflies. Their music is a wonderful combination of melancholic, sensitive pop sounds and dreamlike vocals that are sure to catch your attention. Making waves and gaining new amazing fans wherever they go, the duo have already performed some of their new creations at NYC Popfest in May and are on their way to perform in Chicago alongside the Ladybug Transistor.

So why people from two different bands get together to release their music under the new name? Well, it might be because their partnership just works magic. Lisle and Kristine first worked with each other to record a song for the EardrumsPop’s compilation “Between Two Waves”. The netlabel and its listeners loved the song so much that they soon asked them to continue the collaboration, for which this three track release is the first product. And with Kristine behind the vocals adding the extra personal touch to the recordings and the beautifully composed melodies I just hope there is more to come.

Track 1 and 2 were written by Tiny Fireflies. Track 3 was originally released and performed by Skeeter Davis, written by Arthur Kent and Sylvia Dee; the song was the last track on Longet’s second album “The Look Of Love”, released in October 1967. The track ”Holding Pattern” contains a sample from Serge Gainsbourg‘s “La Horse”.

Most of the attention in the new digital single is often placed on the End of the World track, a cover of a cover – a Claudine Longet’s interpretation of a Skeeter Davis hit. After reaching its highest success in 1963, climbing to number two spot on the Billboard, End of the World was soon covered by a large number of artists including The Carpenters, Nancy Sinatra, Herman’s Hermits, Claudine Longet and now the Tiny Fireflies. And although this new version is definitely worth the three minutes of our time, it is the Snow, with its amazing vocals and beautifully flowing melody, that became my very favorite from the start.

In the past, and in your dreams, everything can be perfect. Tiny Fireflies is the sound of snowflakes burning in candlelight.