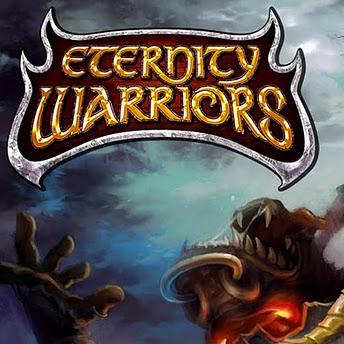 Here we present another great, graphically intense game for Android and iOS – Eternity Warriors.
Developed by Glu games, people who have brought some other very compelling titles, the game is an eye-candy and packs in a lot of mean action for a thorough addictive gameplay.

Eternity Warriors deploys players in Norther Udar, with the sole-purpose of defeating a demon threat spoiling peace after a full 20 years. The land has been threatened by chaos and transformed into a breeding ground of evilness and dangers. All this being done by demonic powers under the command of Demon King Kilic.

The game is high on 3D visuals, with very crisp looking environment, characters, nemesis, weapons and effects. Also, the entire gameplay mechanism is very swift with an intelligent integration of light and heavy attacks. Hardcore gamers will love the array of special moves, combos and devastating attacks available to take out an entire hoard of demonic enemies.

Players also have the option to purchase new armor, swords, axes, power-ups for the best gameplay experience and hours of non-stop action with a highly customized character at your disposal. Eternity Warrior is not just a single player glory but adds multiplayer support; via OpenFeint and Facebook.

In my opinion, Eternity Warriors is a really high-packed, adrenaline pumping game with a very well integrated gameplay mechanism. Final Fantasy lovers will be in for a treat with the similarities this title shares with it. Overall, a great free game packaged in console-quality.

The game on the Android is optimized for the Sony-Ericsson XPERIA play; while the iOS version is an universal app optimzed for both the iPhone/iPod Touch and iPad.