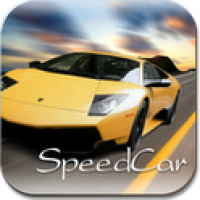 It seems it is raining with casual fun games on the Android Market, and Speed Car is just one of the fine examples. The game sports very simple controls, simple objective and graphics. And although it brings nothing
out of the ordinary to the table, its smooth and quite addicting gameplay certainly turns it into a well worth download.

Created by OoO Studio, this developer has quite a few decent game titles under-their-belt, but Speed Car just blows away those titles when the download numbers are compared. Surely, Speed Car is a game that should adorn the App drawer on your Android device.

Speed Car is a 3D racing game that requires players to achieve the maximum distance at high, low or medium speed. Well, no game can be complete with its fair share of obstacles, so in Speed Car the obstacles are the other cars and trucks on the road. Be careful though, you would never know when a car decides to change lanes. Reflexes is what this game demands and wants.

The car speed is very normal at a decent RPM when the screen is not touched, but the moment a finger is put on the screen, the perpetual boost is activated and then the car keeps zooming like an insane machine. When the car is at a normal speed, every car crossed garners 10 points and with boost a total of 30+10 points is gained. Devices with gyroscope will benefit the most with the response of the car to right and left tilt. The game adopts the Bullet Physic engine support and the crashes never look the same, and that is a big plus point hands-down.

Overall, this is a great game without a doubt and should be tried by all, irrespective of the type of gamer you are. The game is free of any lag or bugs and packs in quite a punch all through the simplicity it sports. In one word, this game is simply Awesome.